Hi! Head over to Not Your Usual Suspects today to read about why I’m writing Ben’s story as a sequel to Wrongfully Accused.

“So now I’m writing Ben’s story. It takes place in Scotland, where he’s gone on a leave of absence from his cardiology practice to decide what to do about his life, and whether to give his marriage a second chance. It’s nighttime, and he’s in a camper at the summit of the highest, most treacherous road in the highlands. A fierce storm has blown in from Iceland and a frantic young woman is banging on his door. It seems there’s been a terrible accident…”

This is the road Fiona was on the night of the accident in my upcoming sequel to Wrongfully Accused. Ben’s camper was at the top…

Son of the Enemy 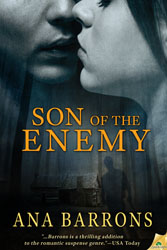